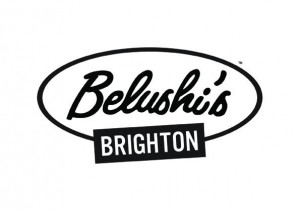 Sadly after 4 years at Belushi’s & St.Christopher Inn in Brighton, I will be spinning the decks here for the very last time. It only feels like yesterday when I first stepped into the bar after my good friend Josh Hunt contacted me about a new exciting night he wanted me to play for… Where it all began! The nightclub is situated on the seafront across the road from Brighton Pier which made it a prime location for a popular evening spot. 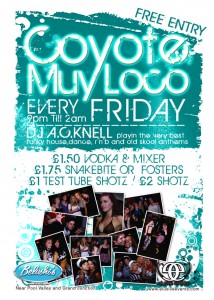 Table top dancers, fire-eaters and House music saw a wild start to your Friday Nights which bought a niche market to the venue.

June 2009 saw my first gig at Belushi’s and the start of great things to come!

Josh continued to run promotions for the night for a year and shortly. I then hired in a promotions team to help promote the night and bring it to new heights… rebranding it to Friday Night’s Muy Loco!

Friday Night’s Muy Loco saw our dancers get people up on the dance floor and party like there was no tomorrow.

The £1 Wildshooters went down a storm and saw the night getting busier week after week. A diverse crowd from Stag, hen parties and corporate parties would often join in the fun.

General Manager, Russell Newby was so impressed that I began running other nights such as the Belushi’s Christmas Eve’s Snow Party and New Years Eve for 2 consecutive years!

Brighton was still lacking some decent mid-week entertainment and fellow DJ Meesta Sleeps and I came up with the idea to host an Eighties night for an older clientele as well as fans of this genre of music. This is when Back to the 80’s was born. 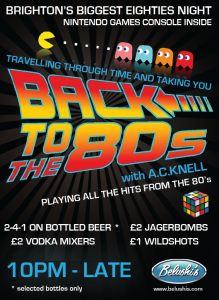 In February 2012, Back to the 80’s bought all the commercial hits of this era to Belushi’s in Brighton every Tuesday Night. As well as the great tunes, we also setup a retro Nintendo Entertainment System (NES Games console) for people to relive some classic gaming from this era with titles like Super Mario Bros setup each week. 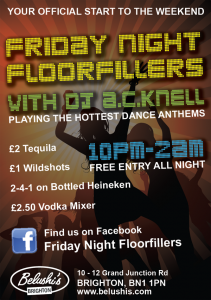 Still with the same music policy as it’s predecessor, Friday Night Floorfillers drew in the crowds looking to celebrate the start to their weekend. Next Friday 28th June, sadly marks the last gig that I will be playing at Belushi’s in Brighton and I have many fond memories from all the staff and friends made during my 4 years there.

I would like to thank you – the crowd for being a fantastic support and Russell Newby for giving me the opportunity to entertain you all over the past 4 years and hope our paths cross again.

Memories from some of the nights can be found still on our Facebook pages (Friday Night’s Muy Loco, Back to the 80’s, Friday Night Floorfillers) or by visiting the Belushi’s photo gallery…

I hope to see you all next week as I plan to go out with a bang, in the meantime I have left with you with a 30 minute mix I have put together in memory of the good times at Belushi’s…

What our customers say…

Coronavirus: Is this the pub of the future for enjoying a post-lockdown pint? news.sky.com/story/coronavi… pic.twitter.com/Y2AnhoZIRj

Word off the “mic”

Christian Preece
2018-10-20T15:34:02+0000
I’ve known Adam for years and was always confident in his ability to entertain the dance floor. Booked him for my engagement party and was so impressed with his service. Arriving at the venue early to set up, a tailored playlist, got everyone dancing, threw in some photography (nice touch) and seemed to really enjoy helping make our evening so great! Can’t recommend him highly enough, will be using again with confidence. Nice one Knell!

Adrian Middle
2018-09-30T17:11:41+0000
We booked AC Knell for our wedding celebration and he was certainly worth every penny and I would highly recommend Adam to anyone looking for a DJ. Adam also offered to take photos throughout the night (which he sent me the next day) at no extra cost so we have some great photos of guests enjoying themselves on the dance floor. Thanks again Adam, we had a great night.

Matt Twitch Wickens
2018-09-23T10:44:27+0000
Fantastic evening with fantastic music. Adam played all the songs we requested and kept the dance floor full all evening. The photos are a nice bonus too! Will definitely be using Adam again.

Hannah Mason
2018-08-26T06:03:45+0000
Adam was the dj at mine and my friends joint 30th party he played everything we asked for was easy to communicate with prior to the party and took some lovely photos. I wouldn't hesitate to recommend.

Michelle Markwick
2018-08-12T08:17:23+0000
Adam was the DJ at our wedding and was fantastic. He always knew what to play to keep everyone dancing. We had a great time and I think that shows in the photos. Thank you so much.

Danielle Kerry-anne West
2018-07-09T16:06:58+0000
I was recommended Adam to do out UK wedding reception and can honestly say he was brilliant, arrived promptly, communication was fantastic he accommodated songs for all age groups it was brilliant. Would definitely book again with out questioning it. Thank you again x

Louise Hunt
2018-06-17T18:27:47+0000
Adam was our wedding DJ at the beginning of this month and I can't recommend him enough. He was so friendly and helpful which took away the stress of arranging our evening entertainment. The music was great which meant I hardly left the dance floor. Thank you so much, Adam. We had the best night!

Tina Martin
2018-04-23T10:53:02+0000
Adam was D.J at our wedding on Friday. He was amazing super friendly, organised and played an great selection of music and encouraged all up on the dancefloor. wouldn't hesitate to recommend �

Grace Young
2018-04-03T11:16:59+0000
Adam was our DJ for our wedding and he was fantastic, everyone was up dancing all night and he even took some great photos of us all. Would highly recommend him to everyone. Thank you so much x

Jayne Cole
2018-03-19T18:43:04+0000
Adam was recommended to me by so many people to DJ at my 50th Birthday party and I’m so happy that he was. From the first time that I contacted him, he was so helpful and friendly and nothing was too much trouble. Throughout the evening he would check I was happy and everything was ok and a bonus is that he takes photos as well, so I have some Lovely photos of my night, which meant I could relax and not worry about taking any and they were all uploaded the next day. The icing on the cake was he helped my daughter and her fiancée get home as there was no available taxis because of the snow. A true gent and an amazing DJ. Thank you so much Adam.

Lucy Knight
2018-01-27T12:34:32+0000
Adam was the DJ at our engagement party last night! What an amazing DJ! He made our night so amazing, played good music, had everyone up dancing, I didn’t see that dance floor empty not once! Thank you again Adam. I highly recommend 😁

Grace Cockill
2017-11-27T22:56:02+0000
Adam was the DJ at our wedding in July and was just brilliant! He had everyone up dancing all night and would most defiantly use again for any future events!!

Alicia Sandeman
2017-10-01T19:49:56+0000
We cannot recommend this DJ enough! He played at our venue Chapel Barn and was a delight to work with. Very professional and everyone had such a fun time.

Jo Simpson
2017-08-25T21:49:28+0000
Adam was the DJ at our wedding and was fantastic. He kept the dance floor busy and was happy to take requests and play songs from a list we had sent him. He always knew what to play to keep everyone dancing. Adam took photos during the evening and got shots of the end of the night once photographer had left. If you are looking for an amazing DJ this is your man. Thank you so much Adam.

Claire Louise
2017-05-16T14:30:03+0000
Adam was FAB! He worked with us months before our big day to ensure we got exactly what we wanted from the disco part of the wedding, including us sending him a huge list of songs all of our guests had requested he play on the night! He was really friendly and even took photos of the wedding - A DJ AND a photographer - What else could you want!?! Thanks Adam, we would highly recommend you to others without a doubt! Claire and Martin

Ailsa McDonald
2016-11-20T13:01:54+0000
I cannot express how fantastic Adam was. We would not recommend any other DJ! Adam was our DJ for our wedding in October 2016 and he was amazing. Before the big day, made sure he had all our favourite songs and answers all queries we had. As far as the actual event, it was perfect! Amazing songs, had everyone on their feet all night, took requests and even took photos. We will definitely be using again when the even arises and will be telling all friends and family! Thank you! Xx

Hayley Pool
2016-08-31T10:51:33+0000
Adam was the DJ at our wedding and we can't recommend him highly enough. He was professional, friendly, happily took requests, took photos through the night and even joined in! Even the guests commented on how good he was! Excellent mix of music and people were dancing all night! Thank you Adam!

Sara Hall
2016-07-30T20:28:36+0000
Adam played at my son's 21st party last night. He was brilliant. Got the evening spot on. Played such a good mix of music and got people dancing all through the evening. Such a nice guy and nothing too much trouble x would definately use his services again and highly recommend him x

Rebecca Powell
2016-06-10T18:51:06+0000
We had Adam for our wedding dj and he was brilliant, always had a smile on his face, played a great mixture of songs, we had song request cards for our guests which Adam happily played, I love that he takes pictures during the night and the last song played was time of my life - dirty dancing, couldn't have chosen a better song to end the night to. Thank you so much

Kerry Stoodley Leppard
2016-01-09T19:51:40+0000
Adam was so helpful in the lead up to Mum's 60th birthday party, he played all requests and a great selection of music whilst taking photos too. Highly recommend A.C Knell Entertainment

Michael Waim
2015-06-24T05:39:52+0000
fantastic, Adam was the DJ at our wedding and he was just brilliant, had a meeting with him prior to discuss song choices and some songs we wanted throughout the evening. simply flawless. many thanks again adam Mr and Mrs Waim

Alex Murray
2014-08-11T15:44:51+0000
AC knell dj'd at our wedding and has done for other family and friends events too, he is amazing at what he does and really easy to talk to, even provides you with photos of your eve which he takes during his set. Highly recommend him.

Andy Stacey
2014-06-12T06:13:09+0000
Awesome dj ac knell is a friendly bloke, plays a good selection of music and listens to requests. Would highly recommend and will use again